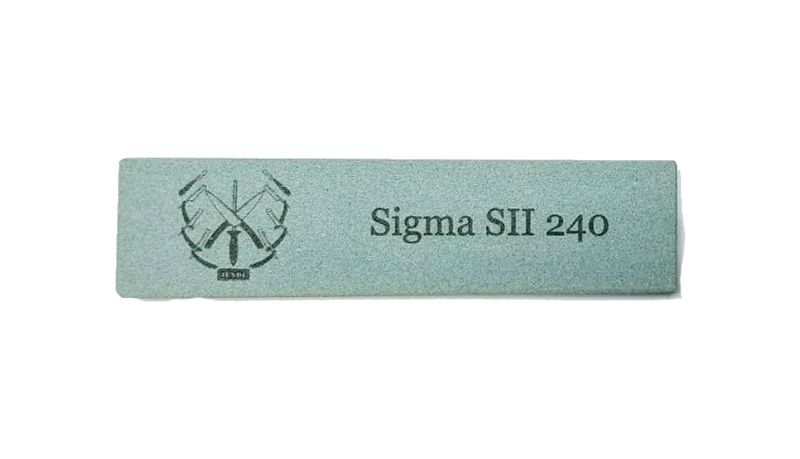 AvailabilityIn stock
SKU
1x4Sig240Sel
Be the first to review this product
$28.00
Details

The 1x4 Sigma Select II 240 grit stone is an aggressive, extra coarse stone used for serious profiling, repairs, and initial sharpening. This is a more gentlemanly workhorse stone that removes metal quickly while leaving a finish that is easily cleaned up on subsequent grits in your progression. It also excels at cleaning up earlier diamond plate and belt grinder scratches.

The Sigma Select II 240 sharpening stone is a premium level extra coarse grit sharpening stone that works on almost all types of knives, scissors, tools and chisels, including those made with abrasion resistant steels. While the 1x4 size is meant for use with the KME Sharpener, it is also a great size for a slip stone, field stone or a pocket stone for knife repairs and sharpening on the go, or to remove unwanted burrs.

This stone can also be used in a mix and match progression of other synthetic and natural sharpening stones, as well with other brands such as Naniwa, Shapton, Suehiro, Imanishi, Spyderco, King, etc. This is a waterstone, and is not to be used with oil, but can be used in conjunction with oil stones (such as Norton India and other carborundum and Arkansas stones) if the blade is wiped clean before and after switching stone types.

On More Traditional Carbon Steel and Stainless Steel Edges the Sigma Select II 240  works on steels between RC 52 and RC 65 on the Rockwell C Hardness scale. The stone itself is aggressive and releases grit for extra punch. It does make quick work of reprofiling and repairing of the softer end of the spectrum of most steels used by many kitchen knife makers like Henckels, Wüsthof, Gunter Wilhelm, F Dick, Victorinox, etc. and steels like X50CrMoV15, AUS6, and 440B. This is also a stone that can be utilized on softer steeled garden tools such as lawnmower blades and hedge clippers and other tools that don’t necessarily need to be as refined in sharpness as they need to be shaped well for cutting at speeds.

On the higher end of the hardness spectrum of traditional steel edges made with steels like 1095, 440C, 52100, Aogami White, O1, Shirogami Blue, W1, etc. The Sigma Select II 240 is one of the best lowest grit you would need for any repairs. The more solid matrix of this stone really reacts well with the harder RC steels and leaves an edge that is clean and prepped for further cleanup by finer grits.

On Carbide Forming Steel and More Abrasion Resistant Steel Edges such as D2, M2, S35V, S90V, VG-10, etc., The Sigma Select II 240 removes matrix steel and carbides. The abrasive release of the stone while in use add to its aggression and can be used to “save” your diamond plates from unnecessary wear, especially on the abrasion resistant steels. It also leaves the surface of the blade prepped for further refinement.