Welcome to Jende Industries, The Holy Mecca of Sharp!

Jende Industries is currently an international company with facilities in the US, Australia, Malaysia, and Taiwan. Ironically, we had no intentions of becoming a sharpening-based company. But as fate would have it, in 1999 we started sharpening (poorly) and fell into the rabbit hole - deeply. Fast forward after several years of trial and a whole lot of error, and Jende Industries was started in 2004 with a single product - the Jende Reed Knife. The name and the knife quickly became the sharpest tools in the box. It is associated with sharpness and quality in the world of oboe, bassoon, and clarinet. From there we branched out into different realms of sharpeningdom, including kitchen knives, wood working, scissors and straight razors. And despite getting kicked off all the hip forums and discussion lists of the day, started becoming known as a respectable source of sharpening knowledge and equipment. 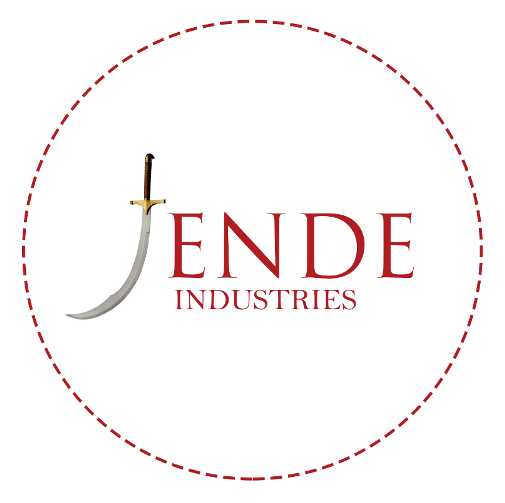 We slowly expanded, adding sharpening equipment and accessories as well as distributing Maestro Wu knives. In 2014, we brought on an associate with a professional chef's background. This launched the Jende name into the culinary world beyond just knives and sharpening with the Jende Knife roll. Once again, the name quickly became known for the quality, and our rolls have since been featured by Chef's Roll, Avocados of Mexico, Barilla Pasta, Versace Mansion, Gunter Wilhelm, and Starbucks to name a few. New and improved products also followed with the expansion of our sharpening strops and emulsions. We also switched gears with our sharpening stones to focus more on the custom cut stone sizes for the growing number of guided sharpener systems now on the market. Jende Industries has the largest selection of grits and sizes for the Jende JIGS for Knives, Edge Pro, Hapstone Sharpener, TSProf Sharpener, KME Sharpener, and Wicked Edge Precision Sharpener (WEPS).

In 2017, Jende Industries went truly global with the introduction of our Australian and Taiwan websites, followed by Malaysia in 2018. In 2019, we refocused our efforts on sharpening and created the Jende Industries Guided Sharpener, or Jende JIGS for Knives. 2019 was an interesting time, when we launched the Jende JIGS for Knives, and started bringing on more Master Kuo Taiwan Tuna Knives. It has promted up to start TunaKnives.com, and some more informational pages like MaestroWu.com, Exconkitchen, and Guided Sharpeners.We now have the Jende drug available on a worldwide scale, and our next scheduled stop is world domination as soon as we develop our nuclear capabilities.

If you haven't noticed by now, we are a company that is very serious about what we do, but we don't take ourselves too seriously. We realize there is a lot of information now available on the web. But as big as we are getting, we still pride ourselves on customer service with actual knowledgeable staff. We know our products intimately, and our customer service is geared at making sure you get the right product for your needs.

Lastly, the word "Jende" is often pronounced incorrectly. We get lots of versions, especially Jen-dee, and for the Europeans, we get a lot of Yen-dee or Yen-duh. It is pronounced Jen-duh, which means "real" in Chinese. Incidentally, Jende also means "prostitute" in Persian, so that makes us "Real Prostitutes", and as a result, we've made it a priority to hire only lawyers and politicians!