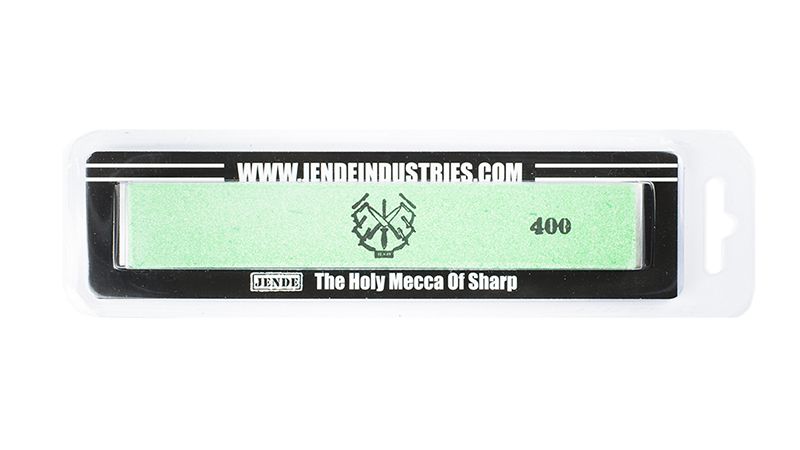 The 1x6" Naniwa Chosera 400 Grit stone is a premium level workhorse coarse stone used for profiling, repairs and initial maintenance on your edges. This stone also cleans up deeper factory scratches, makes transitioning from diamond plates, belts, and coarser stones easier and cleaner, and is a good foundation stone before progressing to finer grits. It’s not generally used as a final or one grit stone, but if it is, it produces a very toothy, aggressive edge that can power through most jobs.

1" x6" x 5mm in size and mounted to a steel blank, this stone is used with water only and works best when soaked in water for a minute or two before use. Let air dry and store dry when not in use.

The 400 Grit Naniwa Chosera sharpening stone is a premium sharpening stone that works on almost all types of knives, razors, scissors, tools and chisels. While the 1x6 size is meant for use with the Edge Pro, Hapstone and TSProf sharpeners, it is also a great size for a slip stone, field stone or a pocket stone for knife sharpening on the go, or to remove unwanted burrs.

On More Traditional Carbon Steel and Stainless Steel Edges the 400 Chosera works on steels between RC 52 and RC 65 on the Rockwell C Hardness scale. The stone itself is more solid, so it lends itself better to cutting quickly into the softer end of the spectrum of steels like X50CrMoV15, AUS6, 440B, and most steels used by many kitchen knife makers like Henckels, Wüsthof, Gunter Wilhelm, F Dick, Victorinox, etc.

On the higher end of the hardness spectrum of traditional steel edges made with steels like 1095, 52100, 440C, Aogami White, Shirogami Blue, O1, W1, etc. The Chosera 400 removes any surface rust, reestablishes the bevel and edges leaving a hazy gray, consistent finish. The solid stone allows for more pressure to be used in order to get some work done without the worry of the stone dishing so fast.

On Carbide Forming Steel and More Abrasion Resistant Steel Edges such as VG-10, D2, M2, S35V, S90V,etc., The Chosera 400 stone still removes matrix steel and carbides without much problem and is best utilized for removing and cleaning up diamond plate or belt sander scratches to prep the edge for a more even surface before going to finer grits.